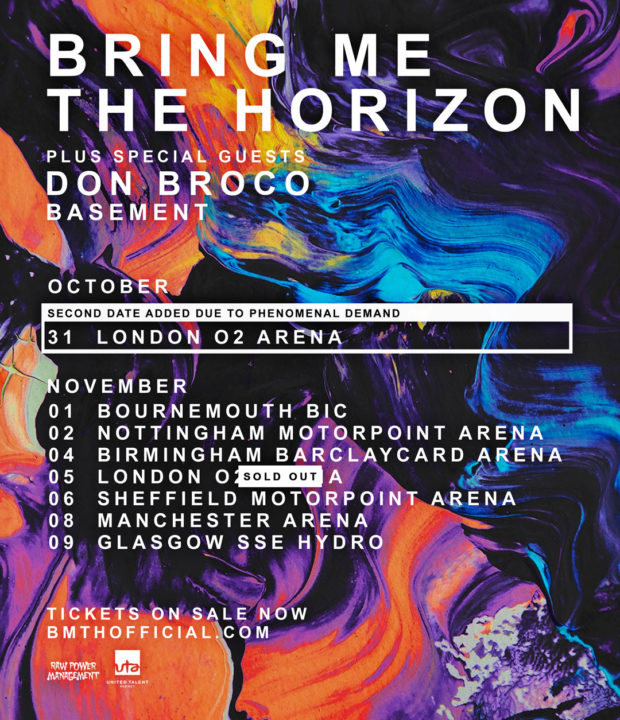 Don Broco have been announced as main support for Bring Me The Horizon on their UK arena tour throughout October and November. Don Broco will join BMTH for all eight dates, including two nights at London’s O2 Arena.

The announcement comes on the same day the Bedford four-piece release their brand new single ‘Everybody’, the first on the band’s new label SharpTone Records.

Bursting with punchy bass lines and hard-hitting guitar riffs, this rock-fuelled anthem is an exciting insight into the future of Don Broco. Drawing on the usual elements of pop, funk, dance, rock and 1980s New Romanticism that make up Don Broco’s sound, the explicit lyrics, aggressive guitars and forceful vocals from lead singer Rob Damiani bring a powerful edge to the track that will ignite the dancefloor at rock clubs everywhere.

The single is accompanied by one of the weirdest, most disturbing and entertainingly tongue-in-cheek videos you’ll watch this year

Don Broco are currently in the middle of a very special 20-date UK headline tour, which sees them calling at 10 cities across the country, playing consecutive nights performing their breakthrough debut album Priorities in full on the first night and 2015’s Top 10 album Automatic on the second night.

The band then head out on a 14-date European headline tour in October, ahead of the Bring Me The Horizon tour, playing shows in Spain, Italy, Switzerland, Germany, Belgium, France and Holland, with their second night in Amsterdam already sold out.

UK ARENA TOUR WITH BRING ME THE HORIZON