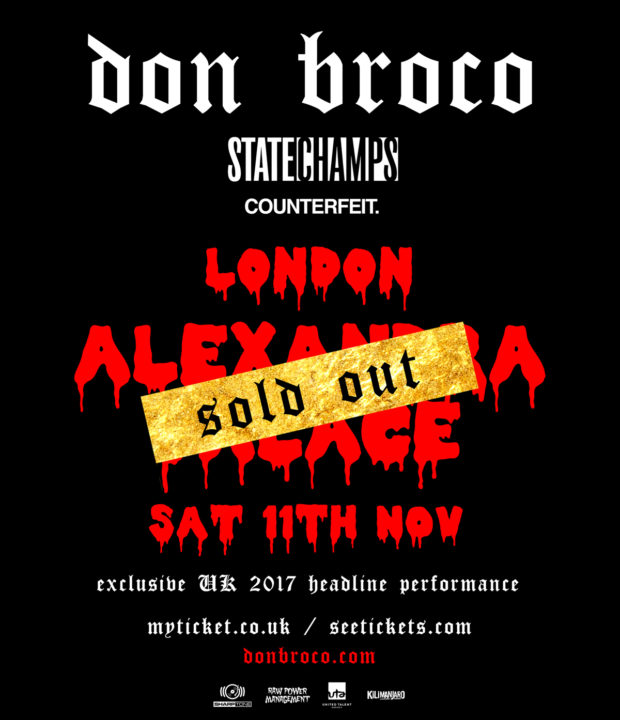 Don Broco have sold out their forthcoming headline show at Alexandra Palace this Saturday (November 11th).

It is the band’s biggest headline show to date, and comes ahead of their brand new album Technology, due for release on February 2nd through SharpTone Records.

The Bedford four-piece recently released the new single ‘T-Shirt Song’, which featured as Annie Mac’s ‘Hottest Record In The World’ at Radio 1 and has been receiving strong support from the station since.

Don Broco are also the cover stars of the latest issue of Rock Sound magazine.

‘T-Shirt Song’ is available as an instant-grat with pre-orders of Technology, and follows the songs ‘Stay Ignorant’, ‘Pretty’, ‘Everybody’ and the album’s title track.

Technology is Don Broco’s third album and follows the release of 2015’s Top 10 album Automatic, which propelled the band into mainstream consciousness and led them to sell out a headline show at O2 Brixton Academy and play arenas across the UK, Europe and Japan with Bring Me The Horizon, 5 Seconds Of Summer and ONE OK ROCK. The band also toured the United States for the first time this year in support of State Champs.

Don Broco are truly taking the step into the big league as they play their sold out headline show at the iconic London venue Alexandra Palace this Saturday (November 11th). It is a huge statement as they continue to cement themselves as one of the most exciting and adventurous rock bands in the UK right now.