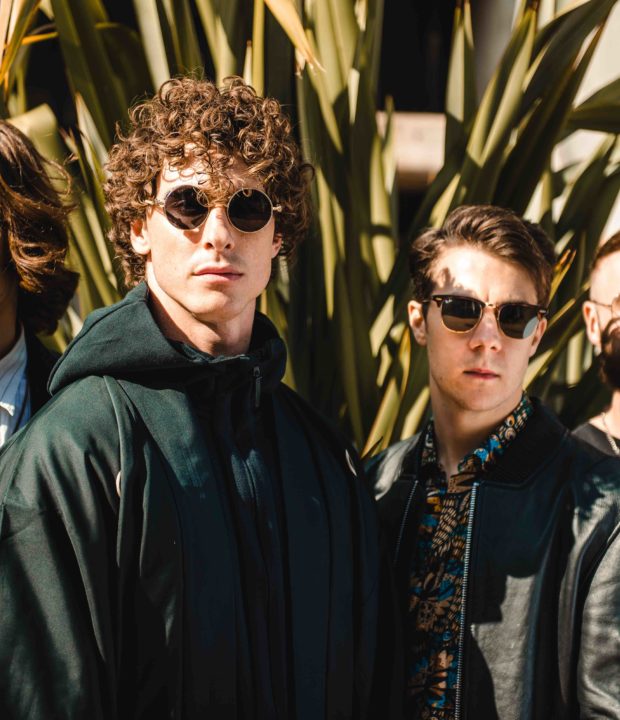 Don Broco have revealed their brand new single ‘Come Out To LA’, taken from their forthcoming album Technology, due for release on February 2nd through SharpTone Records.

Featuring one of the most brilliant, entertaining and OTT videos you’re likely to see this year – featuring death, dancing, robots, inter-band rivalries, mad scientists, insane TV performances and much, much more – ‘Come Out To LA’ showcases Don Broco pushing the boundaries both musically and visually.

‘Come Out To LA’ is a commentary on the band’s own experiences in the city: “On our last album with a major label, like most bands when they first sign a worldwide deal, we were shipped off to LA to meet the bigwigs and shoot videos. We had someone taking us to fancy meals, promising us the world, and in our naivety we lapped it all up. It quickly became apparent that it’s just a façade.”

The track is an eclectic blend of smooth vocal harmonies and infectious guitar and synth hooks, contrasted with a blistering, gritty chorus. Catchy pop-infused verses and brooding synths build to an explosive climax, with pounding overdriven guitars giving way to glistening tones.

‘Come Out To LA’ is the latest single to be taken from the upcoming album Technology, following the previous singles ‘T-Shirt Song’, which was Annie Mac’s Hottest Record upon release, ‘Stay Ignorant’, ‘Pretty’, ‘Everybody’, and the album’s title track. Technology finds the band filtering their charismatic 80s pop-infected rock, through far-flung genres of metal, funk and electronics.The result is a record featuring the band’s most inventive, intelligent and infectious songs yet.

The band recently played an explosive sold-out headline show at London’s Alexandra Palace, and have recently announced a UK headline tour, with MAN WITH A MISSION in support.

Two album release shows have now been announced prior to the tour, at the Bedford Corn Exchange (Feb 1st) and London’s ULU (Feb 2nd). Codes to access a ticket pre-sale will be available from January 8th with any album purchase from here. Tickets will go on general sale from January 10th.