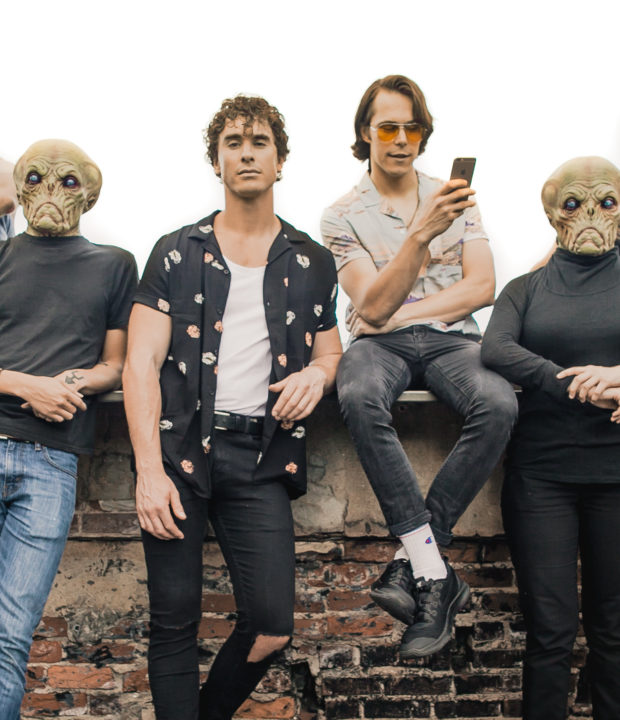 ‘Technology’ is another huge rock anthem from the Bedford four-piece, with hard-hitting riffs and massive choruses. The single premiered on the BBC Radio 1 Rock Show, receiving its first play from Frank Carter who sat in for Dan P Carter.

Regarding the single frontman Rob Damiani says, “‘Technology’ is about a casual swipe through Instagram that ended up in me unfollowing a load of mates. In reality my friends are not vain, self obsessed, PDA loving show offs so I'm blaming social media and the habitual nature of sharing every waking moment of your life online.”

The out-of-this-world video accompanying the track focuses on the band through the point of view of a social media-scrolling smartphone, as Don Broco play a show during a catastrophic alien invasion, to the oblivious attention of the smartphone owner… until their own untimely demise. It is genuinely unlike anything you’ve seen before!

Speaking about the video Rob continues, “We’re all addicted to our phones, so for the video we thought it would be fun to see if an alien invasion was enough for us to put the phones down for a minute… turns out it’s not. In the video game you get to fight off the alien army as each band member and I shoot microphones out my hands which is pretty awesome.”

Fans will be able to immerse themselves in the ‘Technology’ experience with the interactive release of Technology – The Video Game through donbroco.com and the IOS and Android app stores. The platform game, reminiscent of Super Mario or Megaman, will allow fans to play as Don Broco’s Rob Damiani (vocals), Matt Donnelly (drums), Simon Delaney (guitar) or Tom Doyle (bass) as they fight their way out of Alexandra Palace and into the streets of London while shooting invading aliens.

Alexandra Palace will be the scene of Don Broco’s biggest headline show to date on November 11th. The band are proud to announce their recent US touring partners State Champs and London quintet Counterfeit as the support acts.

Their performance at this iconic venue sees Don Broco truly taking a step into the big league, as they continue to cement themselves as one of the most exciting and adventurous rock bands in the UK right now.

Since 2015’s Top 10 album Automatic propelled the band to mainstream consciousness, Don Broco have forged a unique path. Having headlined Brixton Academy and played arenas throughout the UK and Europe with both Bring Me The Horizon and 5 Seconds Of Summer, the band signed a brand new, worldwide deal with leading US independent label SharpTone Records.

This led to the release of the 2016 single ‘Everybody’ and a sold-out headline tour of the UK where they played consecutive nights in ten cities, performing both Automatic and their debut album Priorities in full.

In February 2017 Don Broco spread their wings beyond their European fanbase and headed over to Osaka for two arena shows with Japanese superstars ONE OK ROCK, and in April toured the United States for the first time in support of State Champs. They followed these shows by performing as the main support at Slam Dunk Festivals in the UK and the release of ‘Pretty’, the first single from their upcoming third album… which will also feature ‘Technology’ and ‘Everybody’.