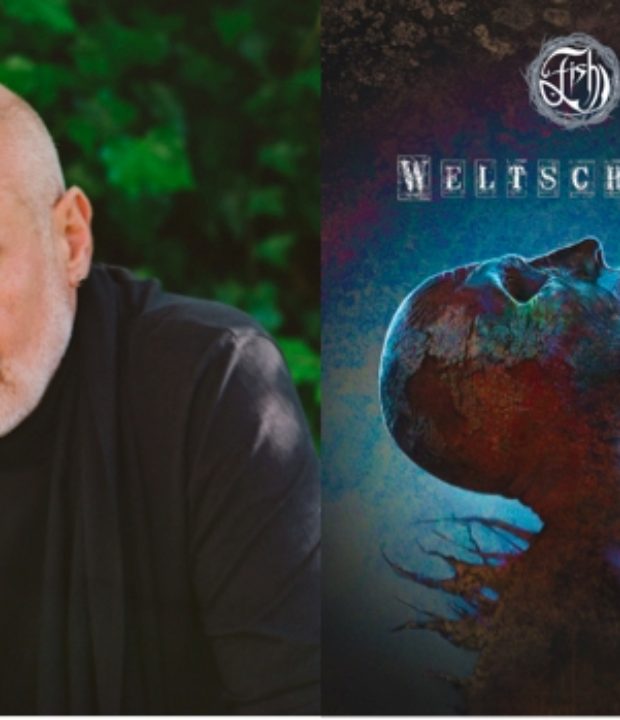 FISH is today celebrating the huge success of his brand new, and final solo album Weltschmerz, which was released last Friday to rave reviews and front cover features around the world.

Having taken the decision not to partner with any record label or pander to the chart rules which require distribution through official channels, he has entirely self-funded, marketed, created and distributed the album from his home in Scotland.

Nevertheless the sales have been through the roof and if the album had been chart-registered he would currently be sitting at no.2 on the UK midweek charts behind IDLES and well ahead of Prince, Michael Kiwanuka, Machine Gun Kelly and Deftones.

It’s an intriguing story of how an artist with a dedicated fanbase and true integrity has taken on the accepted distribution model and achieved real success – financially and artistically – in a tumultuous year.

In addition, the new album has also sold the same again internationally with particularly significant sales in Benelux and Germany. The success of Weltschmerz follows on from Fish’s decision to upload his entire career of 14 solo albums onto all digital platforms in June 2018, going from a standing start to over 10 million streams in just two years.

FISH explains, "I've been operating as an independent artist since the mid 90's and we have adjusted to living without the machinery of the major music business with our small cottage industry since then, constantly adjusting and refining how we sell and send albums out to fans.

With a retail sector in tatters and particularly at this moment in history when there's little footfall in stores, having a mail order set up operating out of the studio where we live has been a life saver.

We were nervous at the pre-ordering and servicing of my new and final studio album 'Weltschmerz' due to the huge global interest and had taken on the services of leisure management system provider Fuse Metrix to create new software to deal with the ever more complicated postage and customs demands worldwide. All copies of the album are packed and mailed out by myself, my wife Simone and a small team of helpers.

Perhaps some might find it highly unusual for an artist to be so hands on but the music industry has substantially changed since I signed to EMI back in 1982 and I realised a long time ago that I had to evolve and become a lot more self-sufficient if I was to continue my career.

Being able to maximise my earnings and simultaneously keep the operating costs you'd normally associate with a big record company to a minimum has meant I don't have to rely on crowdfunding schemes and can have the resources to support the writing, recording and manufacture of albums with the quality of 'Weltschmerz', as well as pay for outside press and promotion agencies to let people know of its existence.

It's a lot of work and a lot of organisation but the levels of satisfaction are immense. I'm proud that as an independent operation based in Scotland with a small dedicated and enthusiastic team and with tremendous support from my fans – who are incredibly engaged with me through social media – that we have managed to achieve the equivalent of a 'phantom' number 2 midweek position for the 'Weltschmerz' album in the UK national charts.

It's disappointing that it won't be officially recognised but we know ourselves what we have achieved and in amongst the 'forest' of cardboard packaging strewn throughout our house there are people with big smiles today!!"

Weltschmerz has received stunning reviews as a truly special album and a career-high for FISH, who after 40 years is hanging up his musical boots to concentrate on other pursuits, including his garden – which fans will get a glimpse of this Friday when he is a guest on BBC2’s Gardeners World.

The 84-minute double album is available to order now from https://fishmusic.scot in multiple formats including double digipak CD with 16-page booklet and as a gatefold 180-gram double vinyl.

It is also released in a deluxe collector’s edition as a hardback book, with 100 pages containing artwork by Mark Wilkinson and 8000 words of sleeve notes by Fish, plus double CD and a Blu-Ray disc containing filmed interviews with Fish and Mark Wilkinson, live audio from 2018, four official videos and making of films and the entire album mixed in 5.1 audio HD and PCM WAV mixes.

“This is my defining statement. I knew that I couldn’t do anything more in music,” Fish insists. “It’s time to walk away. The pandemic has taught me that I need to take the rhythm of my life right down. That’s why Weltschmerz is the perfect ending to it all.”