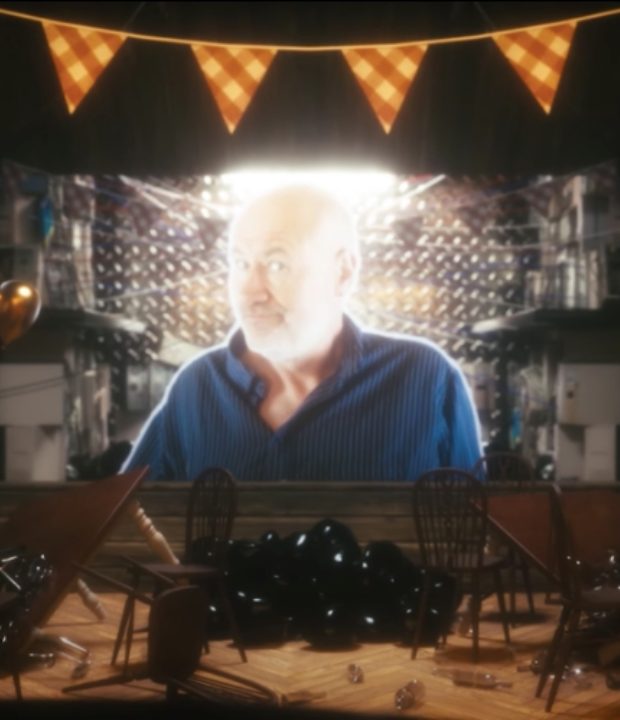 FISH has released his brand new single ‘This Party’s Over’, the latest song to be taken from his highly anticipated final solo album Weltschmerz, which will be released on September 25th.

‘This Party’s Over’ is an honest and reflective song from Fish, which as he explains was inspired by,“when I started to become concerned about my drinking”.Having long been a renowned bon vivant, but in recent years changed his habits, the song mirrors this transformation with upbeat folk-infused rock focusing on the positives of change. The captivating video finds Fish performing the song, wine glass in hand, as animations come to life around him reflecting the lyrics of the track.

The single is taken from the brand new double album Weltschmerz, marking Fish’s final studio recording. It is an extraordinary piece of work that brings down the curtain on the Scotsman’s hugely successful musical career.

“These songs are autobiographical,”explains Fish,“I’m involved in all of them and I didn’t realise that until I sang them in the studio. There’s a lot of self-examination going on here, and I learned a great deal about myself in the making of this album.”

‘This Party’s Over’ follows the recent release of ‘Garden Of Remembrance’, a gorgeous piano ballad wrapped in a stirring arrangement that showcases one of the best vocal performances of Fish’s long and illustrious career.

With an ever-increasing awareness of old age and its associated illnesses through the death of his father in 2016, and his elderly mother moving into care with Fish and his wife in January 2019, he was presented with a touchstone for the lyrics of the song. The aptly titled ‘Garden Of Remembrance’ tells the story of a married couple dealing with the early onset of dementia and the resulting issues of a husband who's "Lost between the here and now/Somewhere that he can’t be found” and his wife.

The singer spent five years of his life in the assembling ofWeltschmerz– the title means“a feeling of melancholy and world weariness”in German. During the half-decade occupied with its gestation, Fish was put through the mill.

But two things caused him to make a record as sombre asWeltschmerz. In 2015, 89 music fans were murdered by terrorists at a concert at the Bataclan in Paris. The incident affected Fish deeply. Meanwhile, his own advancing years were causing him to realise that, as he puts it,“I had my own sell-by date.”

Weltschmerzemits a certain air of finality and closure, but it is not a depressing record. Besides bringing us Fish’s finest set of lyrics to date, Weltschmerzis also his most adventurous and varied piece of work.

“Quite early on, Steve [ Vantsis, bass guitarist, co-writer and chief collaborator] and I decided that if I was walking away then it was time to damn the torpedoes,”Fish explains.“If something was good, we used it. If a song needed to be long or short, so be it. If it needed strings or bass, let’s go for it.”

‘Rose Of Damascus’ is a 17-minute cascade of voice, instruments, alternating tempos and narrated parts, which Fish describes as sounding“like David Lean [the movie director] doing prog”. It’s among several tracks to feature prominent use of musicians from the Scottish Chamber Orchestra.

“We used eight players from the SCO, they’re there in the background right across the album,”notes Fish, who heaps praise upon the album’s producer, Calum Malcolm.

Ultimately, it’s the sheer attention to detail that makes Weltschmerzso special.“Calum knew this was going to be our last album together and he put everything into it,”Fish nods.“This is my most complicated album and for some of the time we were working in lockdown, what he did was truly incredible.”

Weltschmerzalso features the dramatic title track which was released as a single earlier this year, the eerie ‘Man With A Stick’, which was awarded ‘Single Of The Year’ by Planet Rock in 2019 and the songs ‘Little Man What Now’ and ‘Waverley Steps (End Of The Line)’, which featured on theA Parley With AngelsEP in 2018, but have been fully re-mixed for the new album.

The 84-minute double album is available to preorder now fromhttps://fishmusic.scotin multiple formats including double digipak CD with 16-page booklet and as a gatefold 180-gram double vinyl.

It is also released in a deluxe collector’s edition as a hardback book, with 100 pages containing artwork by Mark Wilkinson and 8000 words of sleevenotes by Fish, plus double CD and a Blu-Ray disc containing filmed interviews with Fish and Mark Wilkinson, live audio from 2018, four official videos and making of films and the entire album mixed in 5.1 audio HD and PCM WAV mixes.

“This is my defining statement. I knew that I couldn’t do anything more in music,”Fish insists.“It’s time to walk away. The pandemic has taught me that I need to take the rhythm of my life right down. That’s why Weltschmerz is the perfect ending to it all.”