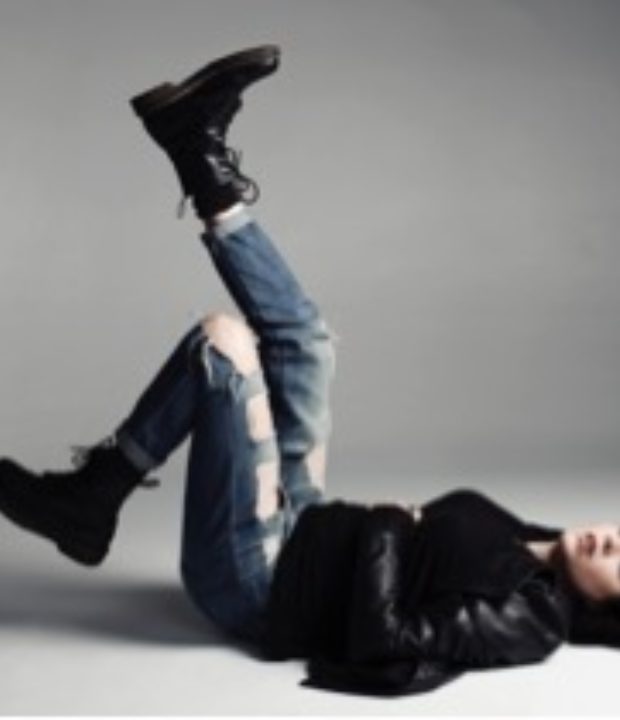 Californian rhyme queen K.Flay has announced her new single ‘Blood In The Cut’, taken from her brand new 4-track EP Crush Me.

“A fascinating, complicated rhyme maven: anxious yet strong willed, simultaneously listless and driven, brilliantly literate but not too hifalutin to salute her favourite TV shows” - Dazed

“San Francisco’s K.Flay is the next big thing” – NME

The moody and infectious lead single turns emotional damage into unexpected greatness. The lyrics are spiked with confessional barbs, but K.Flay never loses her cool, and lines like “reading through your messages/my favorite way to die” slip right into the song’s stripped-down arrangement of bright beats and buzzsaw guitars.

“The song is about the desire to inundate yourself with pain or angst or noise or joy, or really any experience, in order to have ownership of the feeling. Though it emerged from a dark place, the song quickly morphed into a celebratory thing, which was surprising and cool for me. It kind of felt like I was enacting the song as I wrote it” says Kristine Flaherty, the artist who made her debut as K.Flay with a series of releases in 2010 and released her full-length debut, Life As A Dog in 2014.

Newly announced as the first signing to Night Street/Interscope Records (an imprint helmed by Imagine Dragons frontman Dan Reynolds), K.Flay instills endless energy into a collection of songs highlighting her seamless flow and head-turning lyricism. While Crush Me builds off K.Flay’s hip-hop background, the EP also channels her punk sensibilities and DIY spirit into a lush but gritty sound rooted in live drums and guitar.

The darkly charged ‘Hollywood Forever’ matches K.Flay’s commentary on the toxic nature of fame with her own personal revelations (“my father was a user and I’m afraid I’m just the same”). One of Crush Me’s most melancholy moments, ‘Dreamers’ owns up to feelings of loss and regret, but explores the redemptive power of creativity. Also, on the hazy and quietly heartbreaking ‘You Felt Right’, K.Flay offsets her lovesick, ripped-from-real-life storytelling with the occasional self-effacing dig - “I should have known don’t trust a poet, ‘cause they can’t do the math”.

Upon graduating, Flaherty moved from LA to San Francisco and kept up with music, making her breakthrough with the 2011 mixtape Stopped Caring in ’96 and soon landed a deal with a major label. Not long after putting out her 2013 EP What If It Is, K.Flay launched her own label for the release of her debut album Life As A Dog.

In making Crush Me, K.Flay joined forces with Nashville-based producer/musician JT Daly, and LA based producer Simon Says, writing and recording in a converted carriage house deep in the Tennessee countryside. The results are exhilarating, and see K.Flay fulfill her promise as of the US’s most exciting artists.

Having toured the UK earlier this year with PVRIS K.Flay returns to perform at Reading & Leeds Festivals, Bestival, and also play her own headline show in London. She has previously toured with artists as varied as Passion Pit, Awolnation, Snoop Dogg and Dashboard Confessional.

Blood In The Cut