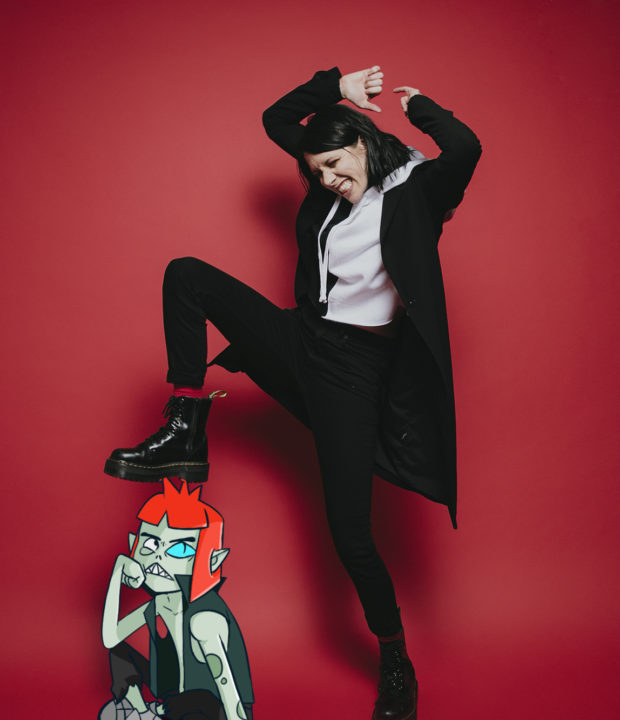 Today, modern music’s alternative mad scientist K.Flay drops ‘TGIF’, a spinning carousel of a rock song which critiques society’s trend of tuning out the bullshit of the world when the weekend arrives.

It features guitarwork by the one-and-only living legend Tom Morello, and is a cut off the GRAMMY-nominee’s forthcoming EP Inside Voices, out June 11th via BMG.

Speaking about ‘TGIF’ K.Flay says, “I started writing this when Donald Trump was president, a time when I felt so acutely that my government didn't represent me, that my government was filled with lunatics and criminals. And I was simultaneously fixated on the absurdity of the work week -- this notion that Fridays are inherently a day of celebration. TGIF. It feels like a rally cry for capitalism, when you take a step back and really consider it.”

Of the collaborative nature of the track, she continues, “The song came together in this amazing way, from me writing alone in my studio, to working with Tommy English and JT Daly (my longtime collaborators) on production, to asking Tom Morello to record the guitars and rip a solo. The word I kept using during the process was DEMENTED. I wanted the track to feel demented, unhinged, insane.”

Tom Morello adds, “K.Flay is smart, powerful, honest and unafraid in her music and in her life. As co-survivors of the Northern Illinois suburbs we have a kinship and a friendship that makes for great synergy when we rock together, as is on full display with the beautifully caustic ‘TGIF’.”

Today’s track drop follows the acclaimed release of ‘Four Letter Words’, the first release off of her Inside Voices EP. Billboard called the track a “rocked-out kiss-off” while Rock Sound praise the “caustic and callous” nature of the track. Guitar Player said it “bites with a force bolstered by sharp, scathing lyrics” and Alternative Press said that it gives fans “a journey into some of the most vulnerable parts of her mind.”

Speaking about the forthcoming Inside Voices EP K.Flay says, “So often we keep everything bottled up. Inside Voices was a way for me to exorcise some demons and safely express these uncomfortable but very human emotions I was feeling.”