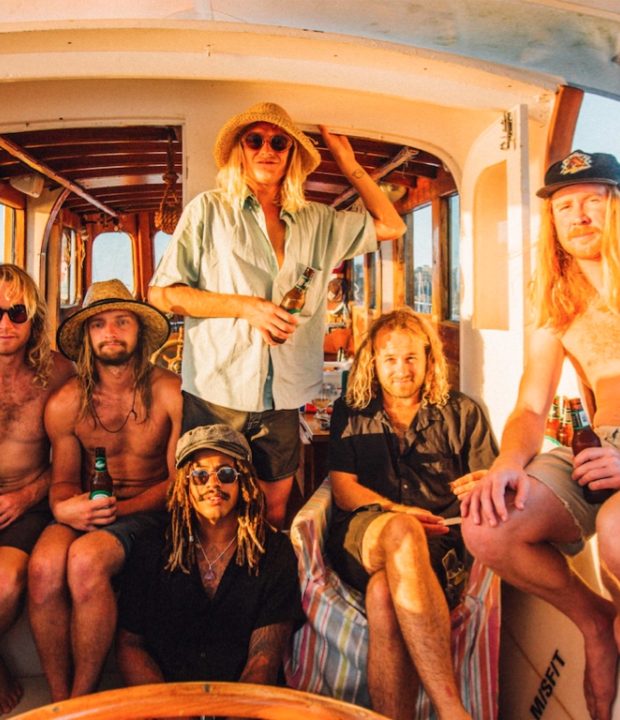 Australian psych-surf-rockers Ocean Alley have shared the video for their new single, ‘Happy Sad’, taken from their new album Chiaroscuro, out now.

A staple of their live shows and a truly memorable moment for all those in attendance, ‘Happy Sad’ is a true epic that sticks with you after every listen. The song showcases the depth of the bands song writing, allowing them to showcase their adept nature to creating psychedelic bliss through a juxtaposed soundscape, alongside a brooding lyrical journey from vocalist Baden Donegal.

Accompanied by a video born from 4 cameras and 8 rolls of film, generating over 10 hours of footage on the bands tours of Australia and North America, videographer Tyler Bell of local Sydney collective The Sauce has perfectly captured the broad beauty of the song to take the listening experience to another level.

Ocean Alley continue to take audiences by storm in their native Australia and across the world with their infectious melody lines and memorable blend of psychedelic-surf-rock.

Armed with their acclaimed second album Chiaroscuro, which also features the singles 'Confidence' and 'The Comedown' and debuted at #15 on the ARIA Chart and was awarded the coveted triple j Feature Album spot, the band has gone on to amass 15 million streams of the album worldwide, along with over 570,000 monthly listeners on Spotify and moving over 7000 units of the album in less than 6 months – an impressive feat for an independent artist.

Ahead of a US tour in November supporting long time friend Tash Sultana, the band will return to Europe and the UK in September for a run of headline shows and festivals, their first tour of the regions since their inaugural visit in 2016.

Due to huge demand in the UK, venues in London, Brighton, Manchester and Leeds have all been upgraded to higher capacities. Full tour dates and upgraded venue info can be found below.