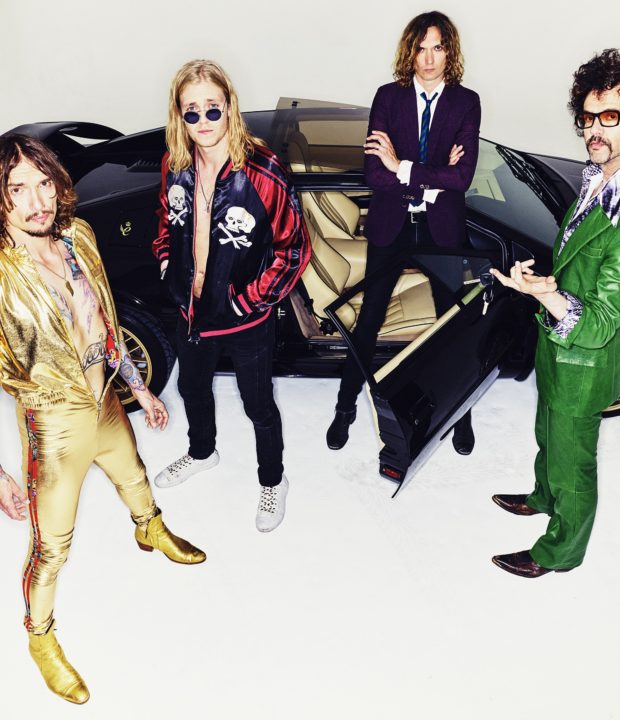 The Darkness have today released the video for their new single ‘Happiness’.

‘Happiness’ is a deliriously feel-good anthem which finds The Darkness embracing the romance of a glorious love song. The video is a spectacular piece of animation featuring Justin, Dan, Frankie and Rufus in a surreal underwater playground of mermaids, octopuses, speedos, seahorses and, erm, tigers.

Regarding the single Justin says, “‘Happiness’ is about seeing only the golden sand and overlooking the broken glass. Hearing the waves crash and filtering out the grotesque cries of mating gulls. Smelling the distant odour of fresh chips and ignoring the stench of nearby dog shit. Happiness is a choice. Choose The Darkness.”

The new single is the latest song to be taken from the album Pinewood Smile which entered the UK Album Chart at No.8, topping the Rock & Metal Chart and becoming the No.1 charting Independent Album on the week of release.

Pinewood Smile showcases The Darkness on electrifying form, delivering some of the most sharp-witted, infectious and downright brilliant songs of their career, which has been greeted by rave reviews. It’s their third Top 10 album release, with all of their five albums charting in the Top 15.

The Darkness are currently touring the UK as part of their European ‘Tour De Prance’, including a headline show at London’s Hammersmith Eventim Apollo on December 10th.

Full dates can be found at http://www.thedarknesslive.com/tour-dates/