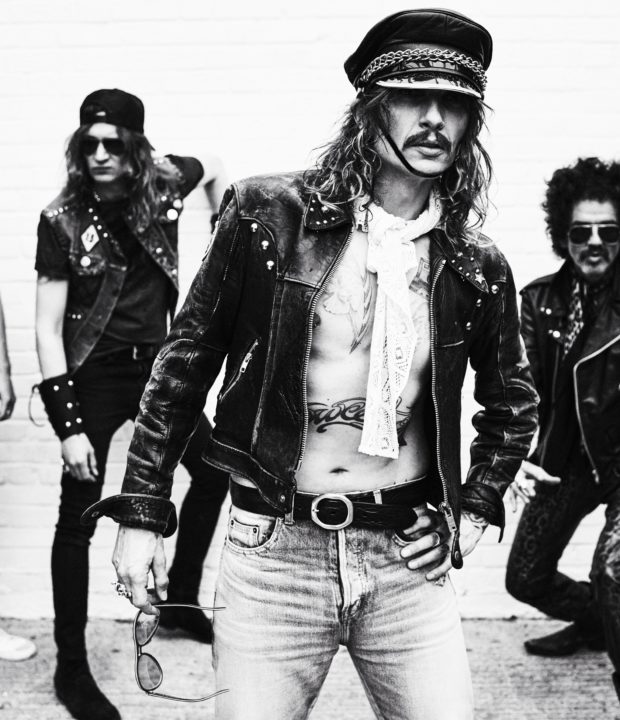 The Darkness have released their brand new single ‘Jussy’s Girl’, the latest song to be taken from their forthcoming album Motorheart out November 19th.

‘Jussy’s Girl’ is sensitive as a falling boulder. It oozes rock n roll extravagance with huge 80s influenced riffs and an anthemic chorus that summons the inescapable carnal powers of love.

The fantastical video meanwhile features Justin Hawkins as a leather-clad biker journeying through a telephone box time machine to the good ol’ days of black and white silent movies for a nefarious murder mystery, starring his musical companions in never-before-seen style. It’s quite simply magnificent!

Regarding the single Justin says, “Jussy’s Girl is a song about unrequited desires of both the flesh and the heart. Although one could argue that hearts are made out of the same stuff as flesh. You know what I mean though. It’s about an unspeakable longing, but sounds like a bloke walking around in his 501s on a sunny day. It’s sad, but also carefree. Sonically we were aiming for somewhere between Def Leppard and Billy Ocean. Well, I was. There’s a helicopter in it and an awesome guitar solo. What more could you ask for?”

‘Jussy’s Girl’ is the latest single to be taken from the forthcoming opus Motorheart; a record of immeasurable rock and roll extravagance, and yet another masterpiece from England’s favourite rock icons. The new single follows the release of the high-octane riffola ‘Nobody Can See Me Cry’ and the growling, pounding title track which pays homage to a devoted sex robot.

Released in a wide variety of formats, including standard and deluxe versions, Motorheart is available both digitally and physically. There’s a heavyweight black vinyl album, limited edition colour LPs, CDs and an old-school cassette version. With exclusive bundles and signed editions to boot, it’s the complete aural experience from The Darkness, and a glorious addition to one of the most exciting canons in British rock music, all available to pre-order here.

The Darkness will be showcasing the live potency of Motorheart on their extensive 22-date UK headline tour throughout November and December this year. A true spectacle to behold, fans will be treated to brand new songs from the album as well as hits from across their award-winning, platinum selling back catalogue. Support also comes from British Lion, the up close and personal side project of legendary Iron Maiden founder and bassist Steve Harris. Tickets are available here.