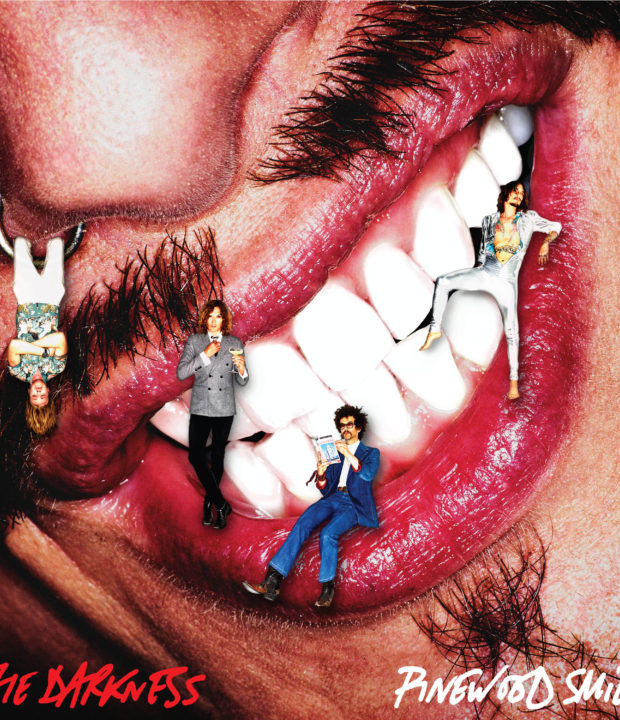 England’s most distinctive, multiple award-winning, platinum-selling, hugely entertaining rock gods – and one-time saviours of rock’n’roll turned national pleasures – The Darkness are back with their fifth album 'Pinewood Smile', due for release October 6th through Cooking Vinyl.

Marking the announcement the band have today unveiled the spectacular album opener ‘All The Pretty Girls’, across all streaming platforms. It’s also available for download with pre-orders of the album for the instant gratification of fans.

‘All The Pretty Girls’ is a glorious, hard-rockin’, autobiographical anthem intellectually examining the fact that when you’re a rock star you get a lot of attention from ladies and discussing the ethical conundrums that come with that.

Addressing the forthcoming album and The Darkness’ undoubted relevance in 2017, Justin asks, somewhat rhetorically of the world at large, “Why should anybody care? Because if you don't, we're fucked!! History will remember us as the apathetic generation who negligently ushered in a dreadful dystopian age that may or may not come to be known as ‘The Rise of the Arseclowns’. We cannot allow this to continue! You may not give a shit about Brexit or Trump, but PLEASE... give a shit about The Darkness otherwise the last bastion of cultural sensibility will fall and our airwaves will be polluted by meaningless pop purveyed by arseholes and morons... Oh wait!”

Returning to save our airwaves from mediocre, auto-tuned tweens and that awful, throbby EDM shite, the album Pinewood Smile finds The Darkness on electrifying form, delivering some of the most sharp-witted, infectious, humorous and downright brilliant songs of their career.

In addition to the cerebral treatise of ‘All The Pretty Girls’, the album boasts the swashbuckling ‘Buccaneers Of Hispaniola’, the expletive-strewn howl of frustration that is ‘Southern Trains’, the hugely emotional ‘Why Don’t The Beautiful Cry?’, the globally anthemic ‘Japanese Prisoner Of Love’, and the ode to pumping out smash hit after smash hit ‘Solid Gold’, which finds The Darkness addressing the turbulent nature of the music industry and how they have enjoyed its flamboyant highs and spectacular lows.

Written in Putney, recorded in Cornwall and produced by Grammy Award-winning producer Adrian Bushby (Foo Fighters, Muse), the compositions have all the crucial elements of classic Darkness fare, but with added layers for the ears to peel away at… like a sonic onion but a lot tastier. It also features the drumming and vocal talents of gorgeous new band member Rufus Tiger Taylor, son of Queen legend Roger Taylor, who shares vocal duties with Justin on two of the tracks.

To celebrate the release of their comeback album Pinewood Smile, The Darkness will be touring extensively at the end of this year playing 17 dates in the UK throughout November and December including a headline show at London’s Hammersmith Eventim Apollo on December 10th (see dates below). The shows are part of a wider European tour, full dates can be found at http://www.thedarknesslive.com/tour-dates/

The Darkness have returned revitalised, re-energised and ready to take the world by the balls once again with Pinewood Smile.

The full breadth of The Darkness’ legendary rise to the top, spectacular slide to the bottom and steady climb back up the greasy pole of rock’n’roll is soon to be laid bare in glorious detail. Currently in production is a philosophical, darkly humorous and deeply personal documentary of The Darkness’ comeback, due for release in 2018.

The documentary is being created by world-renowned photographer and filmmaker Simon Emmett (Jay Z, Matt Damon, Helen Mirren). He has recorded over 250 hours of footage to date, capturing the past, present, hopes, dreams and inner mental turmoil of The Darkness. Until July 31st 2017 the film is garnering funding through Indiegogo, with a variety of exclusive pre-order items - https://www.indiegogo.com/projects/the-darkness-documentary-music#/

As Justin explains, “As soon as ‘Permission To Land’ was wrapped up I already knew it was going to be a mega smash. But I also knew that the second album would not be, and that we’d split up, and I knew we’d come back together and I knew the comeback would be fabulous. The fabulous element of the comeback hasn’t materialised as yet, but it’s all a work in progress. To be frank – the story of The Darkness is: years of perspiration, overnight sensation, over-saturation, temporary separation, reunion elation, career renovation, ‘Pinewood Smile’ creation!”

FURTHER INFORMATION ON THE DARKNESS

2003 gave birth to one of the most extraordinary and best loved bands in the UK. The Darkness released their debut album Permission To Land to overnight success, topping the UK charts, going 5x Platinum and selling over 1.5 MILLION copies in the UK alone. It spawned a series of hit singles including ‘I Believe In A Thing Called Love’, ‘Growing On Me’, ‘Get Your Hands Off My Woman’ and ‘Love Is Only A Feeling’. It clocked up a series of awards including three BRIT Awards, two Kerrang Awards and an Ivor Novello for ‘Songwriters Of The Year’ amongst many others.

The Darkness played a number of landmark shows, including a headline set at the 2004 Reading & Leeds Festivals, as part of a whirlwind career of global touring as international sensations. The band then built upon the success of their debut with their 2005 follow up One Way Ticket To Hell… And Back, which produced the Top 10 hit ‘One Way Ticket’.

In 2006 Justin Hawkins left the band, checking into rehab and The Darkness fell apart. Following successful treatment, the band reformed in 2011 touring Europe and South America in 2012 with Lady Gaga. They released their comeback album Hot Cakes that yearand Last Of Our Kind in 2015.

The band have now returned in 2017 with Pinewood Smile, their first album to come through Cooking Vinyl. Ahead of the album’s announcement, The Darkness toured Europe in support of Guns N’ Roses and are playing a number of festivals in the UK and Europe during the summer.