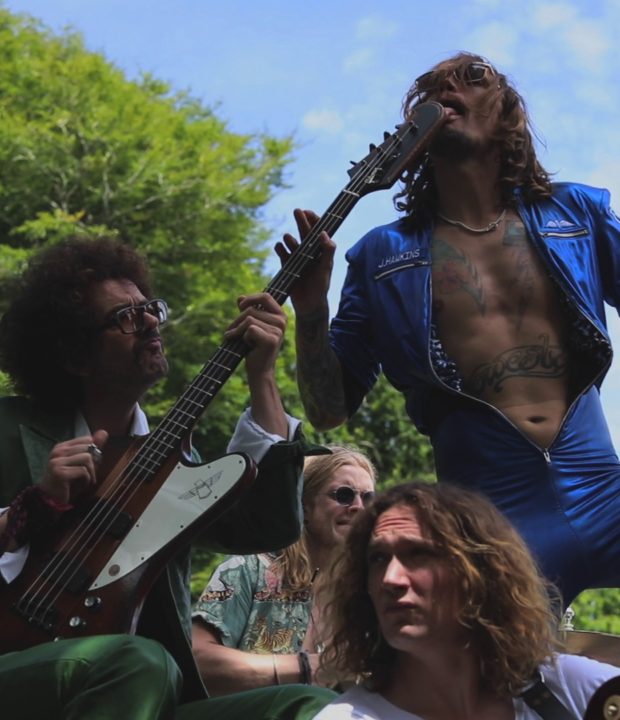 The Darkness have released the highly entertaining, tongue-in-cheek video for their brand new single ‘All The Pretty Girls’, out now through Cooking Vinyl.

Introducing the video in his own inimitable manner, frontman Justin Hawkins proclaims, “Dear People of the Internet. We have made this excellent video to distract you from the humdrum banality of existence. By looking at film of The Darkness preening and cavorting, you will be transported to an unattainable world of awesomeness. Furthermore, we recommend that you purchase our new record album, for which the above video serves as an amuse-bouche. Enjoy!”

The video finds England’s most distinctive, multiple award-winning, platinum-selling rock gods performing ‘All The Pretty Girls’ along the beautifully overcast Cornish shoreline. They embrace the typical British summer by rocking out whilst playing tennis, going on a banana boat ride, travelling on a tractor and even attempting guitar solos while surfing, amongst other suitably seaside-like japes.

The release of ‘All The Pretty Girls’ was greeted with great acclaim and all round fabulous excitement, heralding their magnificent new album, entitled Pinewood Smile, which is released on October 6th. The single is available on all streaming platforms and also available for download with pre-orders of the album for the instant gratification of fans. Click here for details: https://TheDarkness.lnk.to/PS

The album finds The Darkness on electrifying form, delivering some of the most sharp-witted, infectious, humorous and downright brilliant songs of their career.

The album is also the first to feature the drumming and vocal talents of new band member Rufus Tiger Taylor, son of Queen legend Roger Taylor, who shares vocal duties with Justin on two of the tracks, and gets roundly pelted with tennis balls in the ‘All The Pretty Girls’ video… as is only right and proper for the new boy!

To celebrate the release of Pinewood Smile, The Darkness will be touring extensively at the end of this year playing 17 dates in the UK throughout November and December including a headline show at London’s Hammersmith Eventim Apollo on December 10th(see dates below). The shows are part of a wider European tour, full dates can be found at http://www.thedarknesslive.com/tour-dates/