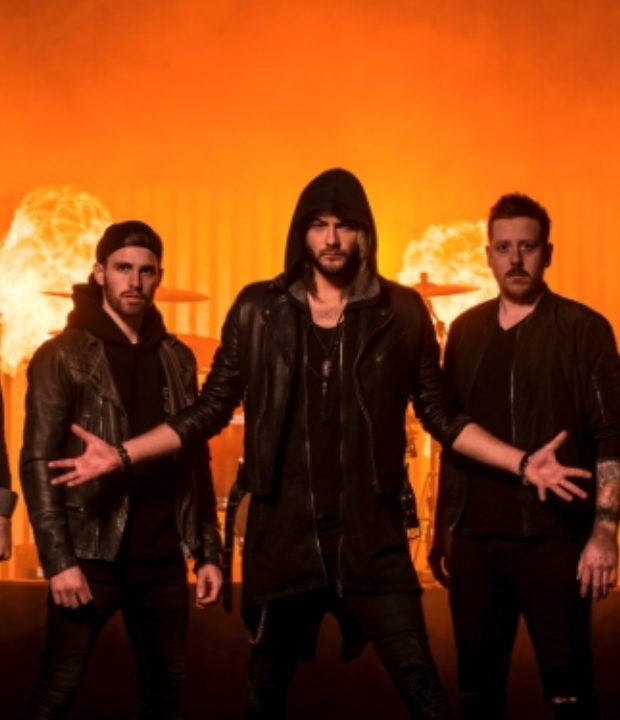 British metal five-piece The Raven Age have shared the incendiary video for their brand new single ‘Betrayal of the Mind’, which premiered with Kerrang! yesterday.

Fueled by an explosive band performance laden with fire, the video explores the darkness and emotion that can affect someone as a result of issues such as mental health. It reflects the lyrical content of the track, which was written about the band’s individual experiences and desire to spread awareness and the feeling of community through their music.

Guitarist George Harris reveals,“With the ‘Betrayal’ video, the idea coincides with the narrative. The actress represents someone who is stuck inside her own mind, it’s eating her up as she loses the ability to simply get through the day without her dark thoughts taking over. The performance concept, however, was pretty straightforward. We wanted a big space with lots of fire! The plan was to use it in certain sections but when we saw how cool it looked we were like “Nah, just go nuts!!”. I’m pretty sure Jai had no hair left at the end of the shoot but it was worth it!”

Vocalist Matt James adds, “The ‘Betrayal’ video not only had to look visually appealing but had to be true to the message of the song. It’s hard sometimes to get the balance of simplicity but also portraying a narrative. I think the directors Richard and Adam did a great job with that. It’s a step up in production from the last video, and hope people will relate to the message. The track itself is a big heavy/groove orientated track which we love playing live as it gets the crowd head banging. It’s been going down a blast on the amazing shows we’re playing with Tremonti and we can’t wait to be playing it, along with loads of other new material next year when we get the chance to tour with Iron Maiden. That’s a dream come true!”

‘Betrayal Of The Mind’ is the second track with Matt James as vocalist, following the previously released ‘Surrogate’, and the next dose of what to expect from the soon-to-be-announced album coming in 2019. Their acclaimed 2017 debut album Darkness Will Rise, saw them championed by the likes of Metal Hammer, Kerrang and Planet Rock, and now with the new lineup the band have shifted up the gears musically, creating material which will see them continue stamping their mark within modern metal.

Following a relentless touring schedule over the past year, The Raven Age are currently on the road in Europe with American rockers Tremonti, which includes five UK dates in Nottingham, Manchester, Bristol, London and Edinburgh in December. The band will be touring extensively throughout 2019, and have just been announced as the support act for Iron Maiden as they continue their ‘Legacy Of The Beast World Tour’ throughout North & South America. Full dates can be found HERE.

All proceeds generated from the first month of sales of ‘Betrayal of the Mind’ have been donated to The Blurt Foundation- an amazing charity that works tirelessly to make a difference to anyone affected by depression. Donations can also be made separately at https://localgiving.org/charity/blurtitout/.