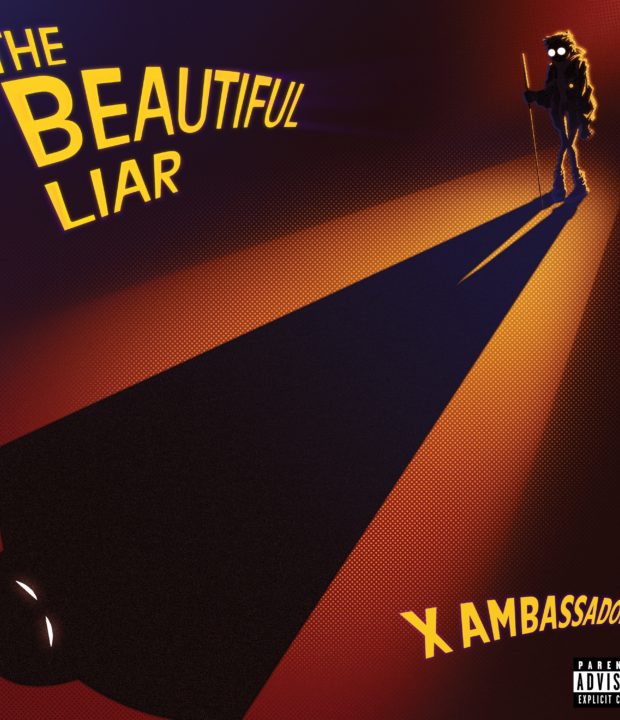 Multi-platinum-selling rock band X Ambassadors have released their third studio album The Beautiful Liar. On The Beautiful Liar, X Ambassadors pay homage to the supernatural radio dramas and books-on-tape brothers Sam Nelson Harris and Casey Harris listened to as kids – sharing a selection of songs that together tell the tale of a blind teenage girl discovering her long-dormant superpowers.

X Ambassadors augmented the album’s storytelling component by weaving in a series of interludes that propel its wildly original plot forward. Featuring previously released singles ‘Adrenaline’, ‘Okay’, and ‘My Own Monster’, The Beautiful Liar is available now at all digital retailers via KIDinaKORNER/Interscope Records/Polydor.

“For The Beautiful Liar I wanted to make an album that felt as unhinged as I did, and as the whole world felt around me,” says Sam Nelson Harris. “So Adam, Casey and I carved ourselves a space where we could all be as ugly, weird, funny, and fucked up as we wanted to be. We made the whole album unequivocally ours with the help of our incredible producer Andrew Wells, co-producers Tommy English, Ricky Reed, Nate Merceau, songwriters K.Flay and Andrew Jackson. I hope this album freaks you out, makes you cry, makes you laugh, and makes you feel a little less alone.”

Earlier this week QCODE, a premium leading content studio and podcast network, announced that X Ambassadors singer/writer/producer Sam Nelson Harris has co-created a new podcast, The Beautiful Liar, which he will also star in and produce alongside Interscope Records. Schitt’s Creek’s Emily Hampshire will voice the role of “Shadow” and serve as an executive producer on the podcast as well. This superhero origin story will serve as a companion piece to X Ambassadors’ new album of the same name. The first episode will be available on October 20th on Spotify, Apple Podcasts, or wherever podcasts are available with new episodes released each Wednesday.

The idea for The Beautiful Liar podcast was first conceived by brothers and bandmates Sam and Casey Harris who wanted to create an audio drama inspired by superhero comic books about a blind character and her superpowers. Structured by co-creator Minnie Schedeen, the story and format is deeply personal to the Harris brothers. Casey has been blind since birth and the two grew up listening to audiobooks and radio dramas together.

Also released today is a music video for the song ‘Beautiful Liar’. Partnering with Mathematic, a Paris-based VFX, animation and motion design studio, Sam and the band create a comic book-esque video that ties together the worlds of the new album and the new podcast. Watch the video for new song Beautiful Liar’ HERE.

The band will be visiting the UK in 2022 in support of the new album The Beautiful Liar and will play two very special shows in February with tickets available now via Ticketmaster.