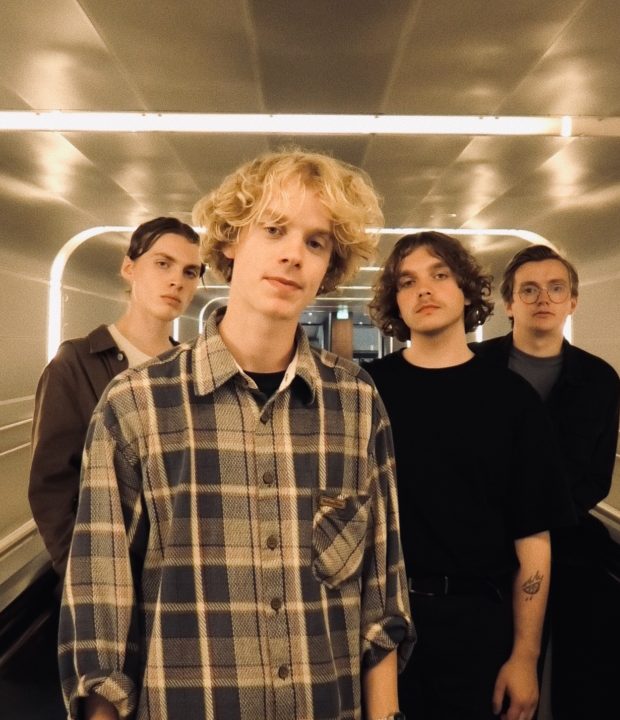 The track is quickly proving a hit and has been immediately added to the playlist of NRK P3 (the Norwegian equivalent to BBC 6Music) and the video premiered today with Clashwho called the track, “a taut, wiry guitar burner, with its innate pop instincts pushed to the limit. 'Skiptracing' puts Clash in mind of Yuck or even Dinosaur Jr. while still pursuing its own path - there's promise here, and originality, too.”

Produced and mixed by Matias Tellez (girl in red), ‘Skiptracing’ is a nonchalant fuzzy indie shoegaze anthem taking on the trials and tribulations of everyday life. The track and video (directed by Laura Dodson) ooze the don’t-give-a-fuck 90s indie rock energy which has previously seen the band draw comparisons to The Strokes, while the scuzzy reverberations of ‘Skiptracing’ also call to mind the likes of Darlia or JAWS.

Regarding the single This Daze say, “Battling out the ever prevalent fight between internal and external forces, ‘Skiptracing’ crosses the intersection of finding oneself and finding ones place in others. It leaves you wondering whether you should be left with a positive or negative outlook through exploiting the irony we all meet of tracing positive change without really searching for it.”

Since their inception as a band in late 2019, the fresh-faced quartet have made an impressive mark on the Norwegian indie scene and beyond. Their first ever gig was supporting punk rock legends Honningbarna at 1000 capacity venue Samfundet in their hometown of Trondheim.

Last year, This Daze were chosen by NRK P3 as ‘Unsigned Band Of The Month’. They also played the showcase festival Trondheim Calling, before releasing their highly acclaimed self-titled debut EP in the autumn, which received praise from the likes of The Fader, The Line Of Best Fit and many more.

In 2021 the band have been selling out their own headline club show in Norway, as well as playing a string of Norwegian festivals, while also spending time in the studio with Matias Tellez preparing to launch their brand new music. The first taste of this is ‘Skiptracing’, which is the start of a very exciting project out next year and proves them a hot new prospect for 2022.
THIS DAZE ARE
Erlend Eggan (guitar/vocals) / Martin Engelien (guitar) / Martin J. Ringerud (bass)  Hallvard L. Näsvall (drums)

ACCLAIM FOR THIS DAZE

“Completely unshowy, a little snotty, intentionally as hooky as possible” - The FADER

“This Daze’s debut is a breathless and exuberant record that has the scuzz of The Strokes’ early stuff, but with a more righteous attitude” - Secret Meeting

“Irresistibly fun, with the band’s breezy, fuzzy sound recalling the likes of Wavves or early Cloud Nothings” - The Line of Best Fit

“The dejected emo curl in the vocalist’s intonation reminds me of CN’s Dylan Baldi, the stacks of fuzz and searing solo are quintessential Dino Jr., and the whole thing has a brisk garage rock revival sensibility to it that feels Strokes or Hives-adjacent to me” - Endless Scroll

“Their sound is lightning in a bottle” - Closed Caption