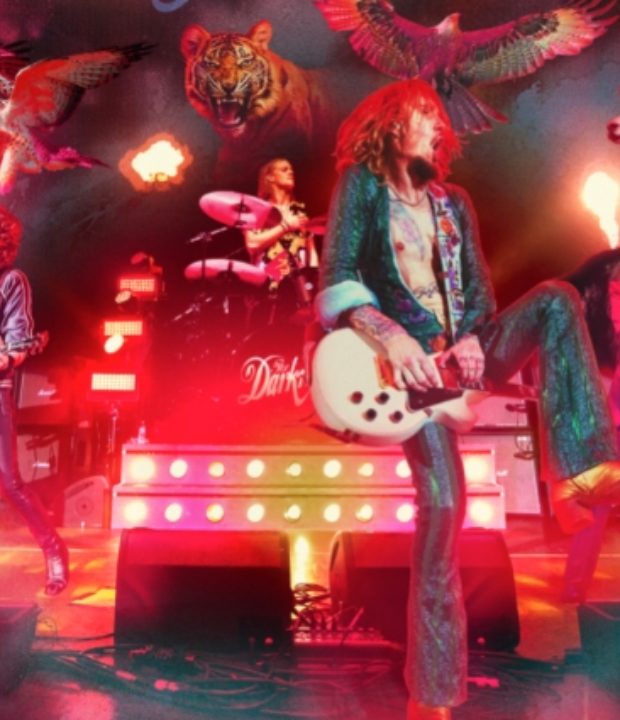 England’s most distinctive, multiple award-winning, platinum-selling, hugely entertaining rock gods The Darkness have announced the release of their live album The Darkness – Live At Hammersmith, out on June 15th through Cooking Vinyl.

The Darkness – Live At Hammersmith is the band’s first live album to be released on all formats (including CD, gatefold double vinyl, cassette, download and stream) and spans their spectacular back catalogue of five albums across 19 incendiary tracks.

Regarding the live album Justin says, “The Darkness is untamed. It cannot be caged. Some very clever recording engineers have discovered a way to capture its essence; all that remains is for us to release it back into the wild.

“Life is about experiences, not possessions. This is your opportunity to possess the experience of The Darkness Live, as perceived by your ears, leaving your eyes free to scan the road ahead for obstacles, or to watch Emmerdale with the sound off, or to mould clay, or to darn socks, or to look at the beautiful artwork in this magnificent gatefold. Release yourself into The Darkness - Live at Hammersmith.”

The Darkness headlined Hammersmith as part of their extensiveTour De Prance, in support of their latest critically acclaimed Top 10 album Pinewood Smile.The tour saw the band sell out shows across the UK and Europe last year. They are currently on a mammoth 27-date tour of the US, Canada and Mexico.

To mark the live album announcement, The Darkness have made two songs from the album available for streaming now and as an instant-grat with pre-orders of the live album. This includes the swashbuckling live version of ‘Buccaneers Of Hispaniola’, one of the highlights from Pinewood Smile, and their award-winning smash hit ‘I Believe In A Thing Called Love’, taken from their chart topping, 4x platinum selling debut albumPermission To Land.

The Darkness are hitting the road again in June and will be playing arenas across the UK and Europe in support of The Hollywood Vampires supergroup featuring Johnny Depp, Alice Cooper and Joe Perry. Following this they will be supporting Queen at TRNSMT Festival, Glasgow on July 6th and at Dublin’s Marlay Park on July 8th.

THE DARKNESS – LIVE AT HAMMERSMITH