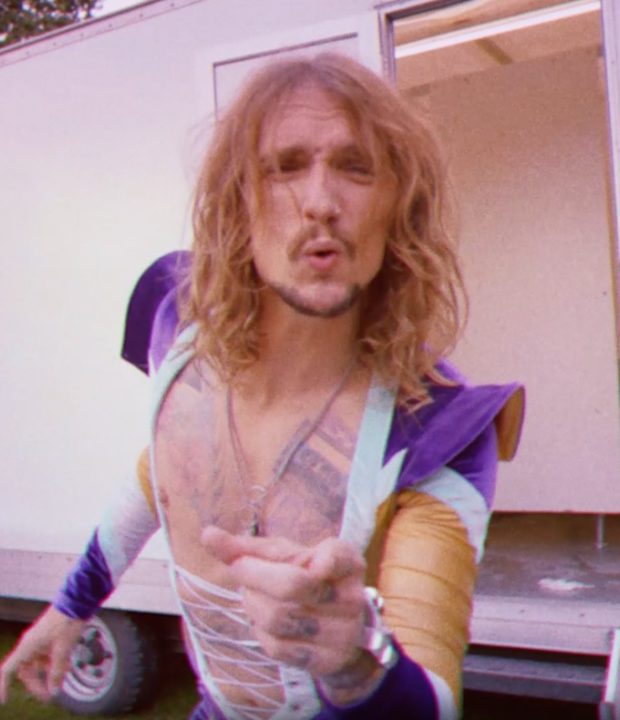 The Darkness have released a spectacular lyric video for the new single ‘How Can I Lose Your Love’, taken from their critically acclaimed Top 10 album Easter Is Cancelled out now via Cooking Vinyl.

‘How Can I Lose Your Love’ is a huge rock anthem steeped in emotion, featuring space-age synths, a gigantic chorus with beautiful hands-in-the-air moments, and almighty guitar solos.

Regarding the song guitarist Dan Hawkins says, “Stylistically and emotionally, it’s just big and epic. The guitars are really loud on that tune. In fact, everything is really loud. It draws you in, builds you up, then hits the brake.”

Frontman and brother Justin continues on the song’s meaning, “I suppose this song is describing a relationship where it got away from me and I was helpless. I felt like I was trying to rescue it, but after a while you wonder if it’s worth saving. I’ve been in that position more than once. Sometimes I’ve been the one that’s created the collapse, sometimes I’ve been the victim of the collapse. I hate it when people say, ‘no regrets’, because you don’t learn anything. You’re doomed to repeat the same stuff. Everyone should have regrets.”

The new album Easter Is Cancelled is the band’s most diverse and exciting yet, examining the role of the musician in the barbarous culture of the world today. At the heart of the tale is love, loss and heartbreak, where redemption is ultimately found in the brotherhood of band friendship and the power of the guitar.

Released in October, Easter Is Cancelled became the band’s fifth Top 10 album and topped the iTunes Rock Chart, while the record has achieved over 2.5 million streams on Spotify alone. The album was released to swathes of critical praise while the previous singles ‘Heart Explodes’ and ‘Rock And Roll Deserves To Die’ proved a radio hit on the playlists of Radio 2, Kerrang, Planet Rock, Total Rock and more.

The Darkness are currently on the road playing Easter Is Cancelled in full, alongside a set of their very greatest hits, on their headline tour. The performances reflect the grand scope and vision of the album, alongside the finest hits from The Darkness’ spectacular canon. Tickets are available here.

ACCLAIM FOR THE DARKNESS EASTER IS CANCELLED

“Hard-riffing and hysterical, The Darkness still have it”
Metro 4/5

“Although it’s a concept album, each of the songs on Easter Is Cancelled stands well on its own”
Billboard

"For those who like their rock adventurous, Easter may be cancelled but Christmas has come early”
Kerrang! KKKK

“A record of ballsy energetic rock that, even by The Darkness’s standards, is completely bonkers.”
The Telegraph

“Fans will love its two fingers up to convention”
Evening Standard

“Proudly brandishing la flame du rock that so many of their contemporaries are scared to look at, never mind grasp.”
Hot Press