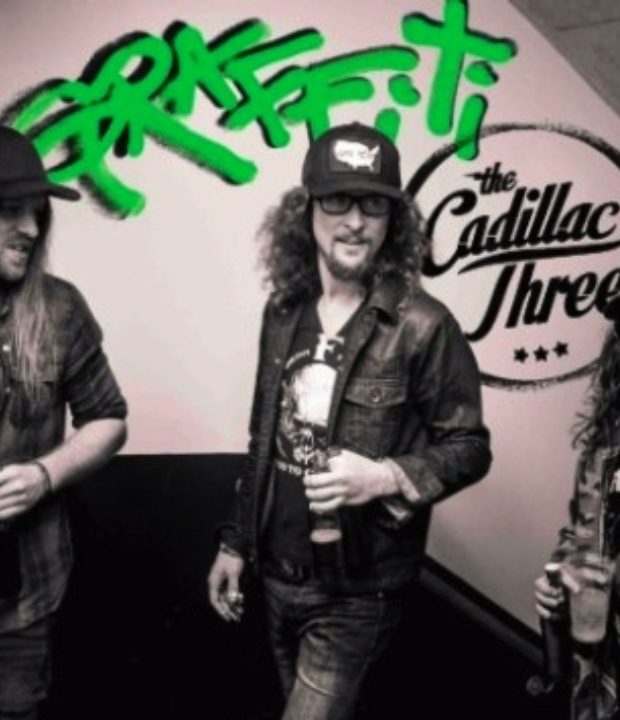 The Cadillac Three have revealed their brand new single ‘Graffiti,' which premiered this morning on Planet Rock Radio and was instantly added to their A-list, ahead of kicking off their ‘Night Life Religion’ headline UK tour tonight in Leeds.

"Like Kings of Leon before them, they're poised for their first big break in the U.K. — where they've sold out every headlining show for nearly two years — before conquering their U.S. home turf” – Rolling Stone

Percussionist Neil Mason penned ‘Graffiti’ – available now via http://smarturl.it/TC3Graffiti – with Corey Crowder and Luke Dick. The soulful southern epic takes the finest of their Nashville roots and seamlessly blends them with a contemporary feel to form The Cadillac Three's trademark sound which is both unique and contagious.

The lyrics echo nostalgia for the band who met in high school: “We’re doing it our way, leaving our mark down the halls, on the walls in the bathroom stalls, underneath that freight train bridge we jumped off // Our story spread around, word of mouth, town to town // We were small-town famous, our names in graffiti.”

The Cadillac Three filmed the music video for ‘Graffiti’ in London yesterday, leaving their mark across some of the capital’s most infamous locations. The raucous Nashville trio has found a welcome home here in the UK with British fans taking them to heart. Their word-of-mouth appeal has ensured each show from their multiple visits to the UK has sold out to bigger and bigger crowds, spreading news of the band’s vibrant live shows across the country at a phenomenal rate.

Since being named the 2014 UK Classic Rock Roll of Honour: Best New Band, The Cadillac Three became the most played new band on Planet Rock in 2015 with several radio singles – ‘The South’, ‘Back It Up’, ‘Party Like You’, ‘Peace Love And Dixie’ and ‘White Lightning’ – all playlisted, while ‘White Lightning’ was a staple on the BBC Radio 2 playlist all summer long.

Masters in blending the weight of heavy music with the swagger of southern rock and the true grit of country, The Cadillac Three’s current nine-date tour will be in support of their eagerly anticipated upcoming album – the follow-up to 2014’s critically acclaimed debut Tennessee Mojo – with more details to be announced very soon.

Although seasoned travelers to the UK, The Cadillac Three will be doing their first ever UK in-store appearance on Saturday, February 6 before their sold-out show at The Tramshed in Cardiff. Taking place at Retro Vibe Music at 2:30pm – 4:30pm, the band will sign copies of Tennessee Mojo and last year's Peace, Love & Dixie EP, as well as play an intimate acoustic set that brings a taste of the Deep South to downtown Cardiff.

Special guests on the ‘Night Life Religion’ tour will be Southern rockersWhiskey Myers, visiting the UK for the first time; the East Texan band’s most recent albums – Early Morning Shakes and Firewater – have been re-issued by Spinefarm in the UK. The Cadillac Three have also just been announced to play at this year’s Ramblin’ Man Fair which will take place on 23 & 24 July 2016 at Mote Park, Maidstone.

Off the back of their prominent UK success, The Cadillac Three will head out with the platinum-selling duo, Florida Georgia Line on their mammoth US ‘Dig Your Roots’ tour starting this July.