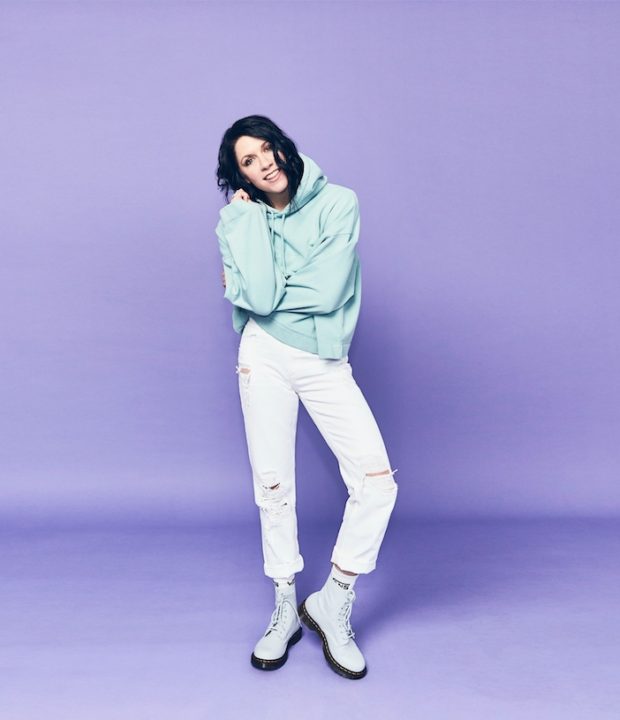 Two-time Grammy Award-nominated Night Street/Interscope Records artist K.Flay has shared the official video for the new single Bad Vibes. The video was directed by Lorraine Nicholson and stars actress Kathryn Gallagher (Annika from the Netflix series You) alongside K.Flay.

Talking about the new video, K.Flay explains, “We wanted to capture what it means to be trapped inside your own negative psyche — and how it might feel to break free. Lorraine had the amazing idea to make basketball and choreographed basketball imagery a central part of the video, and for me that visual just made total sense”, she continues.“I DM'ed Kathryn on Instagram to see if she might be free to shoot the video with us and she was! She is the absolute best”.

'Bad Vibes' was hailed by PAPER Magazine as “a fizzy blend of jock-jam worthy rock and sugary pop”, and likening the song to Kendrick Lamar, if “’Bitch Don’t Kill My Vibe,’ got a rockstar’s facelift”.

The new track serves as the follow-up to K.Flay’s Billboard Heatseekers No. 1 album Every Where Is Some Where. To date, the song has already racked up over 1.5 million combined global streams since its release.

Produced by Tommy English [Ariana Grande, Kacey Musgraves], 'Bad Vibes' slips clever quips— “You’re the sequel that sucks” —between a siren swell of synths, thick percussion, and an unshakable and undeniable chant,“You give me bad vibes…”

“My best friend recently had a kid, and I was like, ‘I don’t want this baby to grow up around sad people’,”she recalls.“I saw this stupid prison-style tattoo that said, ‘Born dead’. I thought, ‘Fuck you, man. I hate this tattoo’. With everything going on in the world right now, I wanted to make some positive music. The goal isn’t to be happy every minute; it’s just to move away from negative energy. Sonically, it’s the perfect introduction to the record. Fuck being sad all the time!”

K.Flay’s gritty, pop, rock and hip-hop crossover sound has seen her tour with the likes of PVRIS across the UK and appear at festivals including Reading and Leeds and Bestival, while garnering support from key British titles such as Q, Kerrang, Rock Sound, Wonderland, Evening Standard, Huck, London In Stereo, Louder Than War and more.

This week, she will be announcing a series of intimate underplays for her US fans. Starting with a show on April 15th in San Francisco and April 17th in Seattle at Columbia City Center. K.Flay is also confirmed to appear at this year’s Bonnaroo Music & Arts Festival in Tennessee and has been added to the lineup for Dan Reynolds (of Imagine Dragons) LOVELOUD Festival in Salt Lake City.

Keep your eyes peeled on K.Flay’s socials and stay up to date with future tour announcements as she plans to return to the UK very soon. www.kflay.com/tour.