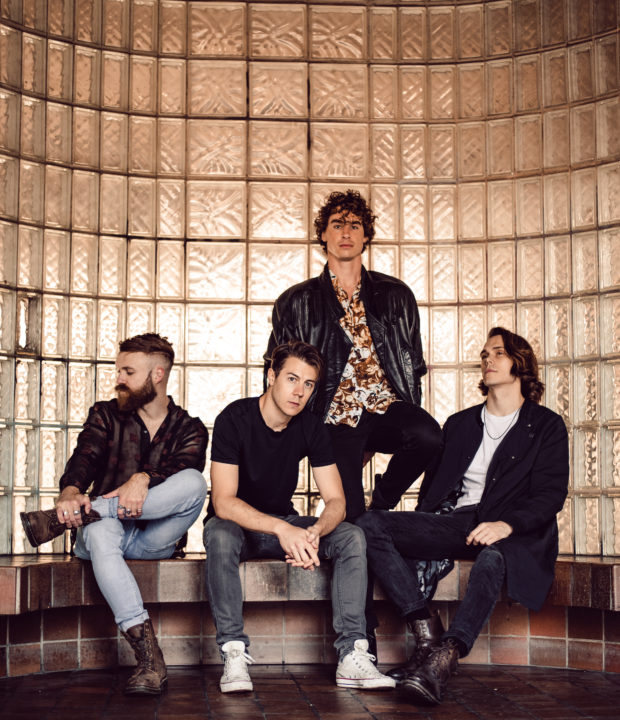 Don Broco have released their brand new single ‘T-Shirt Song’, the latest to be taken from their forthcoming album Technology, due for release on February 2nd through SharpTone Records.

‘T-Shirt Song’ is a colossal rock anthem from the Bedford four-piece, and a deeply personal song for frontman Rob Damiani. Inspired by relationships ending, it also addresses an emotional time for the singer.

Regarding the single Rob says, “It’s one of the most emotional songs on the record, inspired by a close friend who had just been through a dark break-up. While writing the song it was also a difficult time for me emotionally, and one night I found myself in a club where the DJ was playing the Baywatch theme tune. Anyone who's been to a cheesy club night will know this is the moment everyone takes off their T-shirt and swings it round their head. I didn't really feel like it, but I joined in and as stupid as it sounds it really made me feel better. That was the start of the process by which I came to realise there was light at the end of the tunnel. This song is about going through hell and coming out the other side stronger for it."

‘T-Shirt Song’ is available as an instant-grat with pre-orders of Technology, and follows the songs ‘Stay Ignorant’, ‘Pretty’, ‘Everybody’ and the album’s title track.

Technology is Don Broco’s third album and follows the release of 2015’s Top 10 album Automatic, which propelled the band into mainstream consciousness and led them to sell out a headline show at O2 Brixton Academy and play arenas across the UK, Europe and Japan with Bring Me The Horizon, 5 Seconds Of Summer and ONE OK ROCK. The band also toured the United States for the first time this year in support of State Champs.

The new album finds the band filtering their charismatic 80s pop-infected rock, through far-flung genres of metal, funk and electronics. The result is a record featuring the band’s most inventive, intelligent and infectious songs yet, with tracks inspired by their world tours (‘¥’), fake news (Stay Ignorant, Technology) and the effects of the Brexit campaign (‘Porkies’, ‘Something To Drink’), while also addressing personal privacy and smart phone surveillance (‘Good Listener’) amongst songs inspired by relationships (‘Play It Cool’, ‘Tight Rope’, ‘Got To Be You’) and their experiences in the music industry (‘Come Out To LA’).

To mark the forthcoming release of their most expansive record yet, Don Broco are playing the biggest headline show of their career to date at London’s Alexandra Palace on November 11th. Their performance at this iconic venue sees Don Broco truly taking a step into the big league, as they continue to cement themselves as one of the most exciting and adventurous rock bands in the UK right now.

Additionally, the band have today announced a full UK headline tour running through February 2018. Don Broco will play 11-dates across the UK, starting at Portsmouth’s Pyramids on February 8th and finish at Glasgow’s Barrowland on February 21st. Tickets are available on pre-sale now with pre-orders of Technology. Tickets go on general sale through donbroco.com on November 3rd.

Tickets go on general sale through donbroco.com on November 3rd.